The Wreck of the HMS Speedy

THE WRECK OF THE HMS SPEEDY: The Tragedy That Shook Upper Canada
by Dan Buchanan
Published by Milner & Associates, 2020
6 x 9 inches, 260 pages, softcover

The sinking of HMS Speedy in 1804 was more than a tragic loss of the 20 souls on board—it had far-reaching repercussions for the young colony of Upper Canada.

At the centre of it all is Ogetonicut, a Mississauga man charged with murdering John Sharp, a white trader. As Ogetonicut’s trial drew near, it was moved east to Newcastle for fear of angering the indigenous community that was gathering at York. With the shipping season coming to a close, the HMS Speedy set sail with the accused and the legal elite of Upper Canada on board. But on the night of October 8, the Speedy was lost in a violent storm; there were no survivors and the ship could not be found.

The mystery surrounding the ill-fated vessel has continued for more than two centuries, despite the efforts of commercial diver Ed Burtt, who began a search for the Speedy in the early 1990s. Were the remains he located at the bottom of Lake Ontario from the lost ship? What evidence lay in the untouched artifacts Burtt found?

Based on unparalleled access to archival documents and to all Ed Burtt’s unpublished research and records, this is a meticulously researched look at a fascinating episode in Canadian history—the story of the ship and those who sailed her, the modern-day search for the wreck, a First Nations protagonist and perspective, the legal personalities and colonial government of the time—and a unique social history of early Canada. 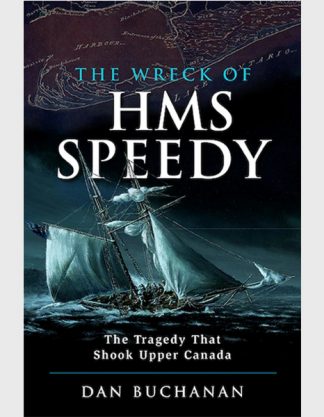