MILITIA CASUALTIES OF THE WAR OF 1812
by Janice Nickerson
Published by Dundurn Press and the Ontario Genealogical Society, 2012
Softcover, 5.5 x 8.5 inches, 221 pages

The militia’s contribution to the War of 1812 is not well understood. Even now, 200 years later, we don’t know how many Upper Canadian militia men died defending their home.

York’s Sacrifice profiles 39 men who lost their lives during the war. They include 19 residents of the Town of York, five residents of York County, and 11 residents of Halton, Peel, and Wentworth Counties. Where possible, biographies include information about each man’s origin, residence, occupation, civic life, family, militia service, and circumstances of death. A section on records provides detailed guidance in finding and using records from the period to trace an ancestors militia service and life in this difficult time period.

Includes a complete list of men who served in the three York regiments during the war identifies those who were killed, injured, captured, or deserted. 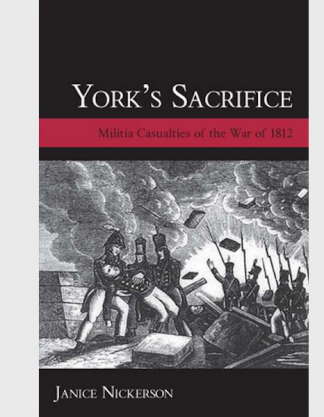