The area to the west of the newly established Town of York was chosen by Lt-Gov Simcoe as the best site for a military reserve and Fort York. Many British Army soldiers travelled with their families and they were part of the military establishment. It soon became apparent that a burying ground  would be needed, and the plot that would become Victoria Memorial Park Cemetery was laid out on true compass points in about 1793. The site went by many names over the years, the boundaries were altered as the military reserve was sold off for development, and many markers disappeared. The historical significance of the cemetery was recognized several times during the intervening centuries and visible markers transcribed. This booklet gathers all those recordings into one consolidated index. Includes a short history,  photos and maps. 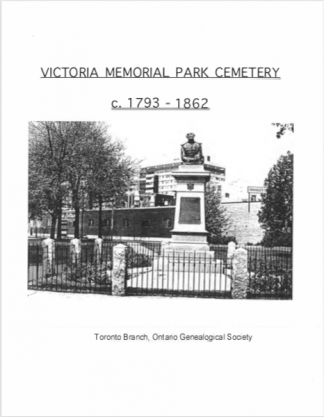