Over the course of World War One, over 500,000 men and women volunteered and tens of thousands more were conscripted to serve in the Canadian army or the Canadian Expeditionary Force (CEF) as it was known; over 450,000 served overseas, some 60,000 gave their lives to the cause, and over 170,000 were wounded or disabled in the conflict.

The war was also fought at sea and several thousand Canadians joined the Royal Canadian Navy (RCN) and the Royal Canadian Navy Volunteer Reserve (RCNVR). Thousands of Canadians fought their war in the air with the Royal Flying Corps (RFC), the Royal Naval Air Service (RNAS) or the Royal Air Force (RAF). In addition, tens of thousands of men, who emigrated to Canada before the war returned to the United Kingdom and served in the Army, the flying services, the Royal Navy and in other capacities, ranging from inland water transportation to civil defence.

Canadians at War 1914-1919 identifies which records survive for those who served during World War One, where those records are, how to access them, and the author provides many helpful tips on how to interpret them. 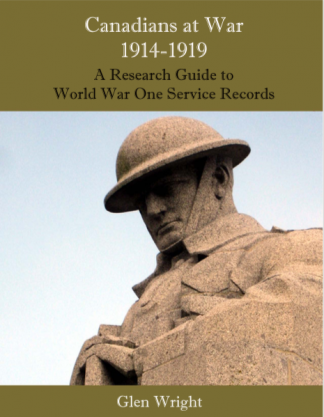