A transcription of the grave markers
Published by Toronto Branch OGS, 1993
8.5 by 11 inches, 10 pages
PDF download

This publication (NYK-019) describes the small cemetery, which is no longer visible, located on part of Lot 4, Concession 4E, in what was York Township and is now part of the City of Toronto. The cemetery is located on the south-west corner of Lawrence and Victoria Park Avenues.

Originally known as “Fitzpatrick Appointment”, it was established in 1841 by the Wesleyan Methodist Congregation in Wexford. It was conveyed to the Canadian Methodist Church in 1884, then to the United Church of Canada in 1925.

The church building was sold and moved about 1880 but burials continued until about 1900. In 1985, the gravestones were replaced with a cairn.

Every legible word on each gravestone has been transcribed with some lost information added from earlier transcriptions. The booklet includes an introduction, a map and is fully indexed. The index can also be consulted in The Ontario Name Index. 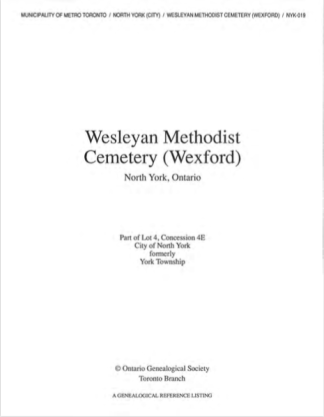