View cart “The Little Immigrants: The Orphans Who Came to Canada” has been added to your cart.

Modest Hopes: Homes and Stories of Toronto’s Workers from the 1820s to the 1920s

Celebrating Toronto’s built heritage of row houses, semis, and cottages and the people who lived in them.

Too often, workers’ cottages are characterized today as being small, cramped, poorly built, and disposable. But in the late 1800s, to have worked and saved enough money to move into one was an incredible achievement. Moving from the crowded conditions of boarding houses, or areas such as Toronto’s Ward or Ashport’s “shanty-town,” just east of the city, to a self-contained, six-hundred-square-foot row house was the result of an unimaginably strong hope for the future, a belief in it, and a commitment to what lay ahead.

For the workers and their families, these houses were far from modest. The architectural details of these cottages suggested status, value, and pride of place; they reminded the workers of where they had come from, with architectural roots from their homeland. These “modest hopes” are an undervalued heritage resource and an important but forgotten part of the Toronto narrative about the people who lived in them and built our city.

Through the stories of nine families—McTague, Buchman, Ching, Chow, O’Connor, Ferguson, O’Rourke, Moore, and Jackson, who lived in these “Modest Hopes,” the authors bring an important but forgotten part of the Toronto narrative to life. 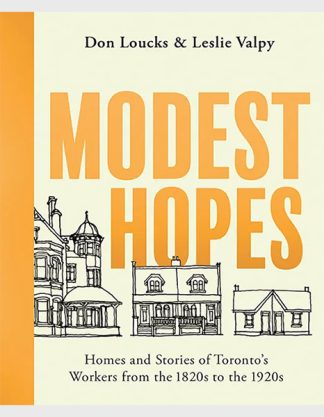