The Story of a Painting

AN INVESTIGATION INTO THE CREATION OF “THE DEATH OF LIEUTENANT FITCH”
by Robin Brooks-Hill
Published by the author on Blurb.ca
8 x 10 inches, 44 pages, PDF download

Lt. William Charles Fitch of the Royal Grenadiers, the 27-year-old son of a prominent Toronto business family, was killed at the Battle of Batoche in May 1885. A dramatic painting of the event was bequeathed in 2007 to the Royal Ontario Museum by the author’s cousin—but why it was created and how it came to be in the hands of the author’s family is a mystery.

In an attempt to solve the mystery, Toronto Branch member Robin Brooks-Hill delves into the Fitch family and their associates in Toronto, the militia and its involvement in the North West Campaign, and the intense media coverage and impact the military action had on Toronto society. Evidence compiled to identify the painter shows fascinating links between fine art and popular culture at  a rapidly changing time in Toronto’s history.

Note: A hard-cover print edition is available for purchase from Blurb.ca. 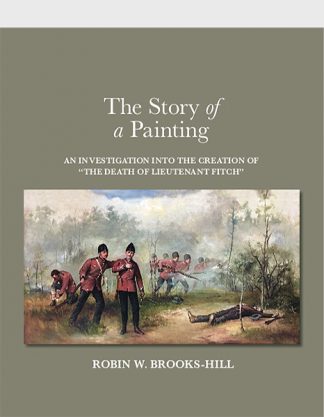 You're viewing: The Story of a Painting $9.99
Add to cart